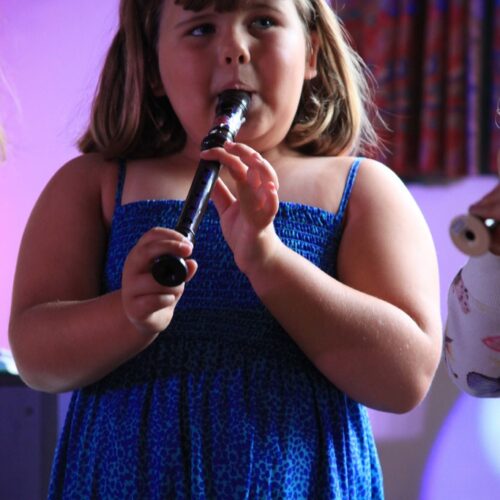 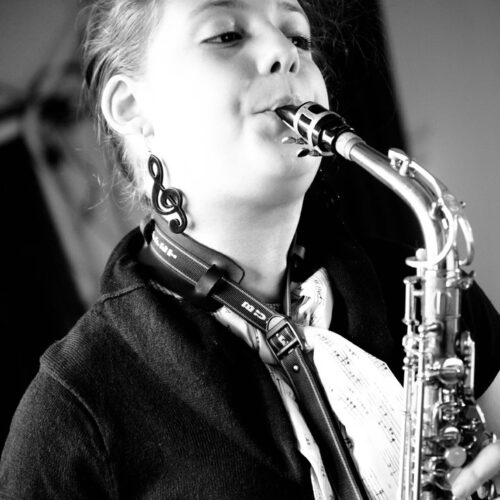 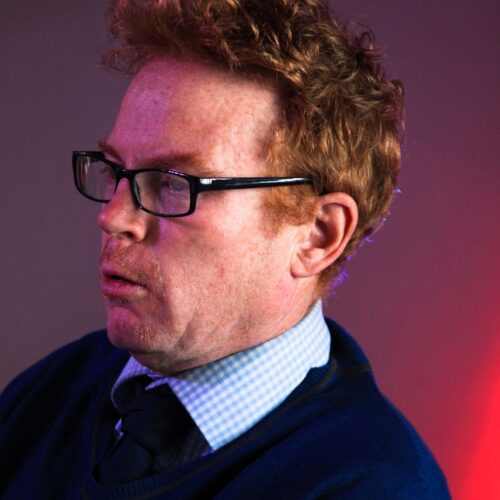 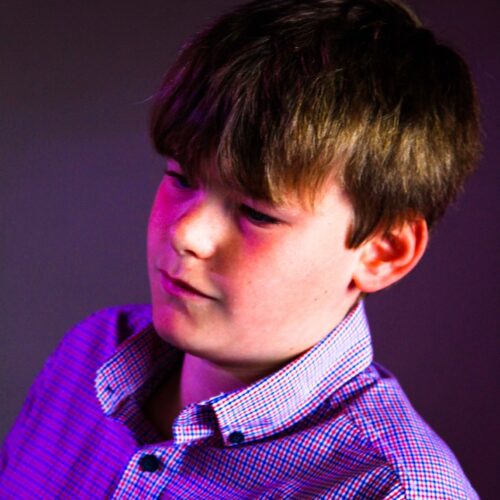 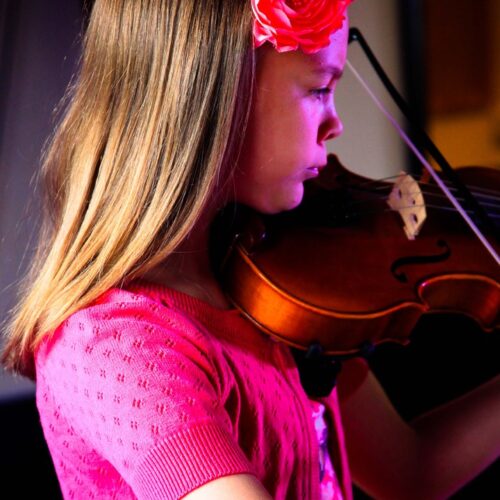 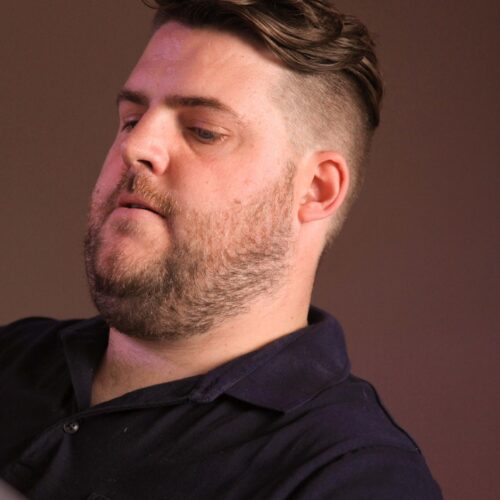 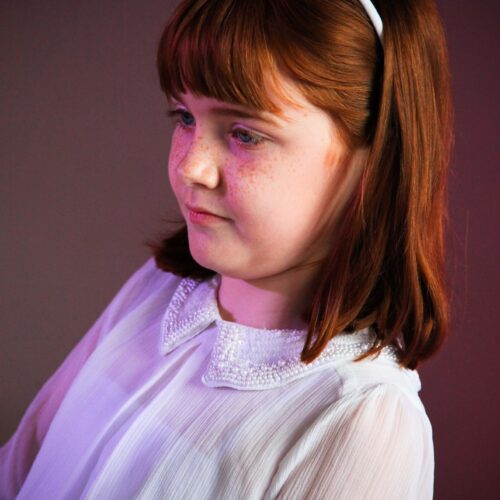 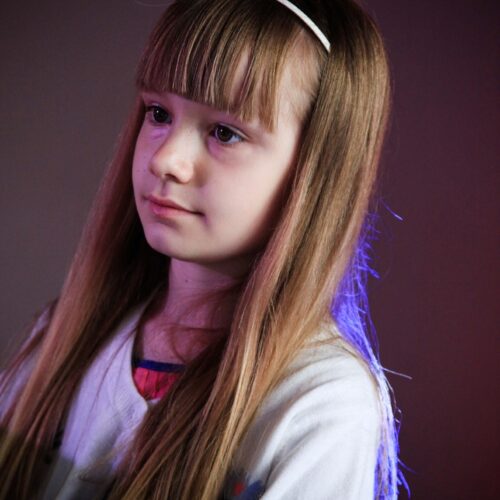 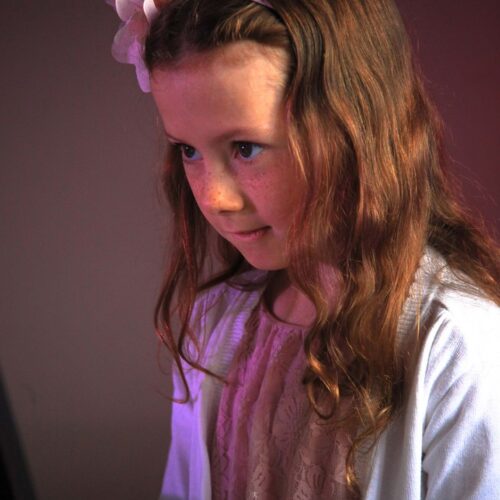 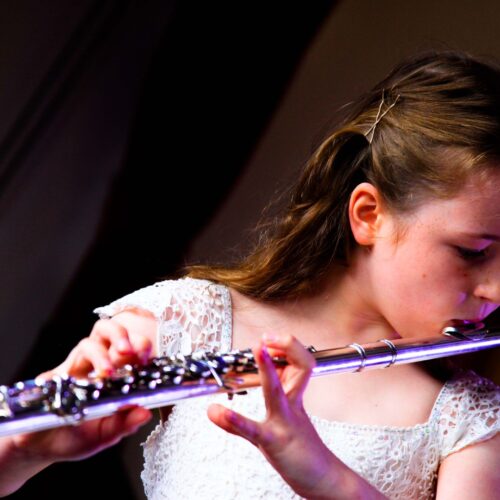 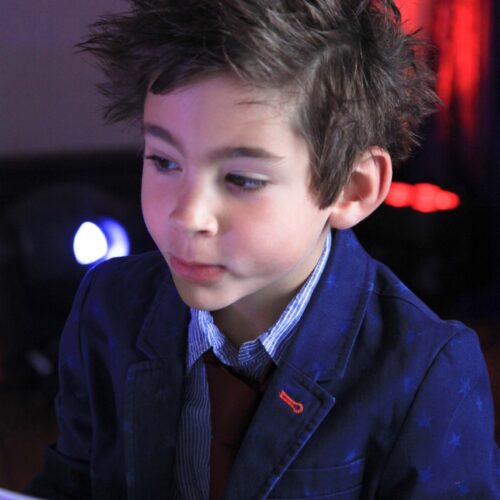 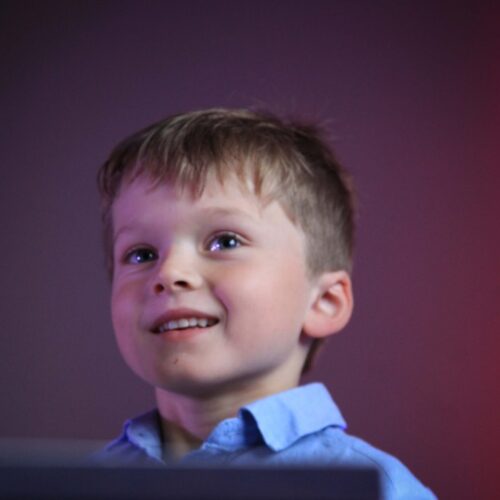 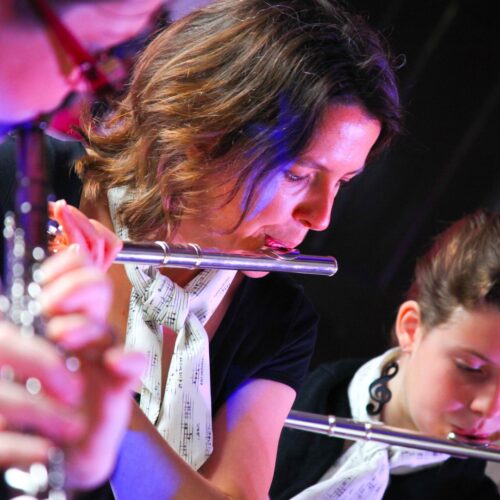 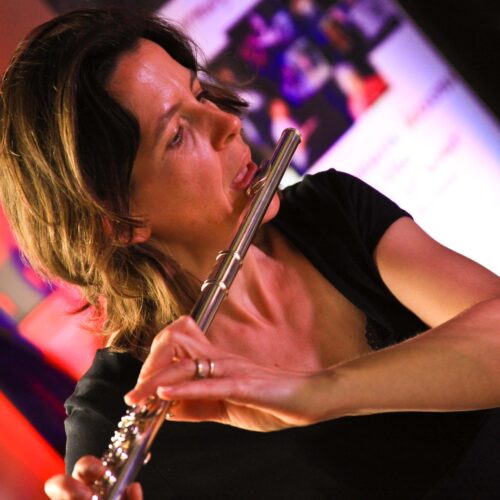 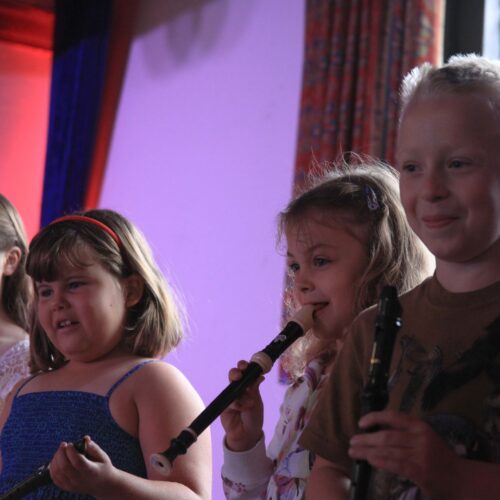 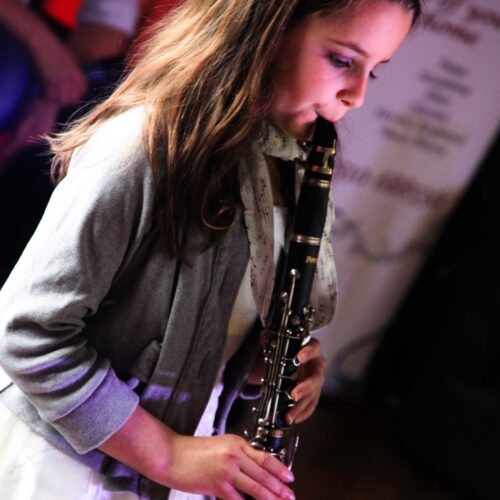 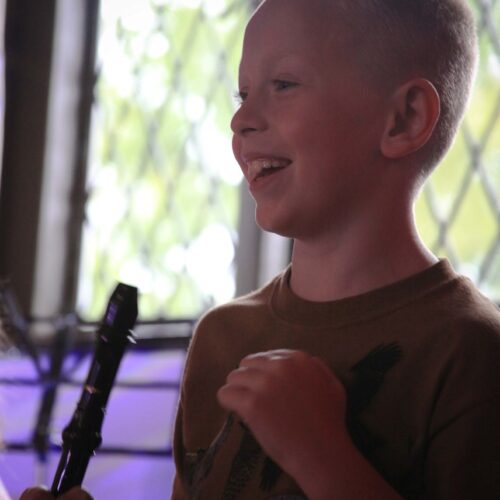 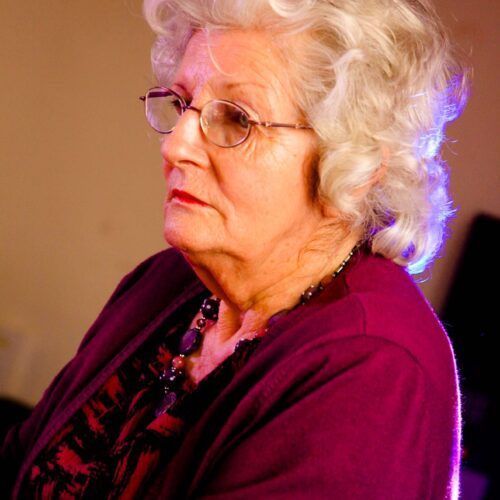 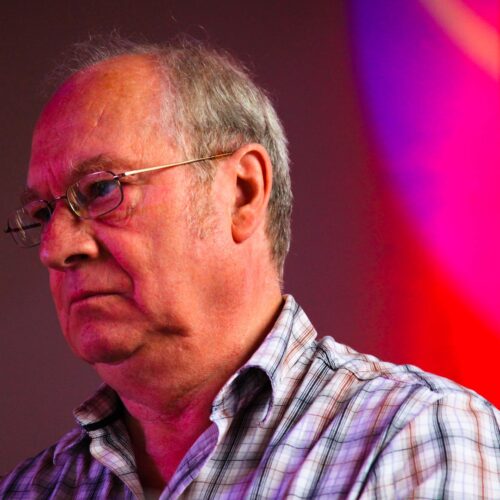 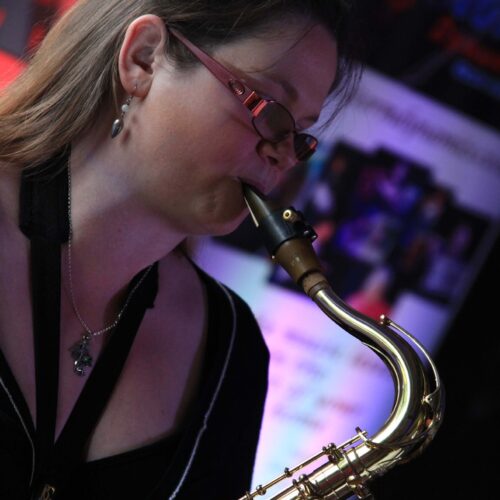 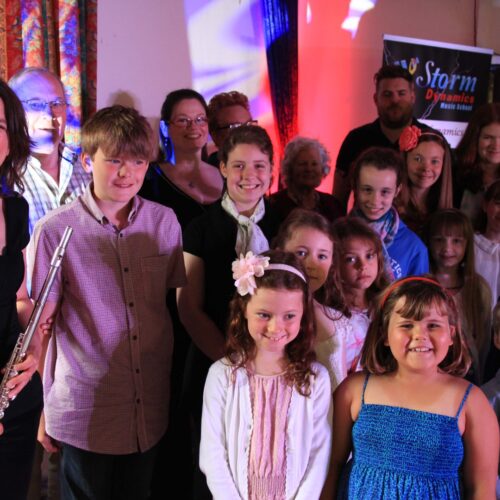 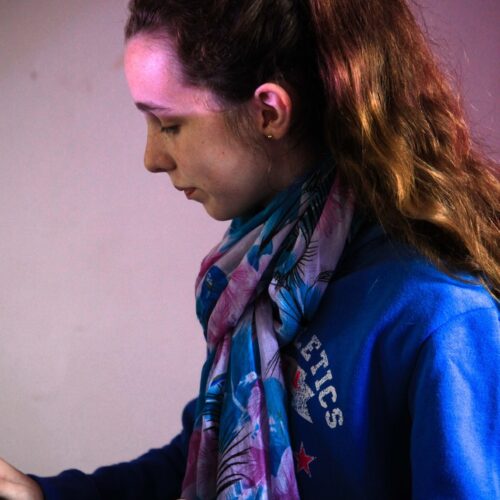 In complete contrast to the last concert the 13th June was clear, bright and warm. Our team of helpers arrived early and with thanks to Aaron Austen and Team Ledwidge we managed to get the Goodworth Clatford Village Club concert ready in no time at all. Scott Shortland of Experience DLS outdid himself on the lighting and sound management and soon there was nothing left to do but wait for the students to arrive – and collect cakes off them when they did!

The premise behind this concert was to let the students play whatever it was they really wanted to play. They could literally pick their own music. After some weird and wonderful suggestions a pattern started to immerge with students asking if they could pick their own instruments too. I’m proud to say that we have many multi-instrumentalists in Storm Dynamics and they all got to strut their stuff at this event.

As has become tradition we began the event with a performance from the Hatherden Primary School Recorder Choir. Ethan Riley, Emma Vimey, Charlotte Scott and Sophie Monrow may have been the only few to make it but with the gusto they gave their performance of the Funky Chicken you wouldn’t have known there was only a few of them. Thanks to a little hinting from compere Russell Nash the recorder choir soon had the audience up and dancing and showing off their funky chicken moves.

Sam Spooner is only 6 and he’d had just 4 piano lessons by the time the Pick Your Own Concert came around. But that didn’t deter him. He played Mary Had a Little Lamb with such confidence some of the bigger kids (and adults!) were left wondering where he got it all from.

Keira Spear has her piano lessons at Hatherden Primary school and is used to the security of a small group to play in front of. She was quite surprised by the size of the hall and the concert but didn’t let that stop her playing Old MacDonald to the best of her ability.

Luca Zanchi had been really looking forward to the Winter Wonderland but had fallen ill on the morning of the concert. Determined to make it this time he stepped on stage in a very fetching blazer and wowed everyone with Yankee Doodle played on the piano.

It’s not the first time playing in public for Amy Henry. She’s done a few of our concerts now, 2 at her school and even come and had a go at busking. Amy played Turkey by John Thompson a song she would play in 4 days’ time at her piano Prep Test.

Another young student working for her Prep Test is Francesca Martindale. Francesca has a long history of shooting very high when it comes to concerts so it was a surprise when she said she would play her Prep Test piece The Grand Old Duke of York rather than something which would give her teacher palpitations.

The first of our multi-instrumentalists was on stage next. Megan Robinson has had an exceptional year for music. She’s won every music prize available at her school, earned herself a place at the exclusive Godolphin School based on her musical ability and been taking part in concerts at every available opportunity. She’s our Student of the Year for 2014 based on her flute work but she decided to start the concert on her viola with a much commented on version of The Swan by Saint-Seans.

Hannah Ledwidge had set up a little surprise for her parents at this concert. She’d taken a relatively easy piece called Thatched Eaves and set a dance routing for herself and her accompanist. As if keeping, notes, timing and rhythms wasn’t hard enough she then wowed the crowd with Acker Bilk’s Stranger on the Shore – it’s hard to believe she’s only 8.

Angus Mills went next showing extraordinary amounts of bravery. Angus had never played in front of anyone until late last year when he attempted a concert at his school Hatherden Primary. Although it went well he was left uncertain of whether to try public performance again. One the day, however, no one would have known he was nervous. Showing fantastic stage craft he walked confidently to the piano and gave a flawless version of Melody by John Thompson.

The best known multi-instrumentalist of Storm Dynamics is, of course, Paul West. No one, including tutor Jo, is ever sure what he is going to do next (remember the tuba from the last concert?) This time he announced he’d been learning another new instrument but did not feel he was ready for public performance. Instead he treated the audience to two piano pieces; autumn by Vivaldi and Song of Erin by Dunhill.

Rebecca Ledwidge is fast gaining a reputation for outstanding flute playing. Determined to achieve Grade 8 before she leave school she has been working tirelessly on the music theory (as you must pass Grade 5 theory in order to progress to the higher graded examinations.) In the mean time she has been keeping herself busy with a new instrument, but more on that later. For the Pick Your Own Concert she chose to play a very fast version of Be Our Guest from Beauty and the Beast.

Rebecca didn’t get a break after that, however, as she was straight back on stage to play with the Woodwind Belles flute trio. Rebecca, Sandy and Jo formed the trio late last year and have spent the intervening months busily getting a set together and writing their own show. For the Pick Your Own Concert they chose Chanson Triste by Tchaikovsky, a favourite of the trio.

Now full of tea and ginger cake the audience settled down for the second half which began with Laura Wilson playing El Condor Passa on her electric keyboard. Laura has to sett of a backing and change chords all whilst playing the melody and simultaneously programming the keyboard to all fills and alternate sounds. This is not as easy as Laura makes it look!

Sophie Henry went next playing Can’t Help Falling in Love With You. Sophie has taken a massive bravery test this year when she decided to join is in busking for Breast Cancer Awareness at Asda in Andover. She said she found it to be a good experience and was pleased to be raising money for a good cause. Coming off stage at the Pick Your Own Concert she said she was glad the busking has helped her with her nerves.

Megan Robinson came back to the stage next to show everyone why her flute playing has earned her the acclaim it has over this past year. She played Off She Goes which is a part of the ABRSM Grade 2 syllabus.

Our next piano player was Bill Hall, husband to the cuddly toy maker. Both Bill and Pat had attended the Winter Wonderland Concert and Pat had decided at that point that Bill would be playing in the next one. With that encouragement Bill put together and extraordinary programme consisting of Georgia on my Mind, Solitude and Smile. The three songs showed off his range in ability as he effortlessly crossed from jazz to song and back again.

Unable to stay away for too long Rebecca Ledwidge took to the stage next, keen to show off her latest instrument the Alto Saxophone. Rebecca chose to play Food Glorious Food and As Long as He Loved Me. She will be sitting her Grade 2 saxophone in the next exam session.

Our second clarinet player was the multi-talented Paul West. Although he is working towards his Grade 7 Paul likes to play separate pieces for each concert. For the Pick Your Own Concert he chose Jumpin’ a study by James Rae and Lilliburlero which is best known as the theme music for the BBC world service.

Shelia Walsh has been playing in our concerts since we first started and she never fails to produce a flawless programme of wonderful piano music. Recently she has been trying out some jazz standards and so she chose to play Lover Man. Never too far from the classics, however, she followed up with Furchtenmachen by Schuman.

Sandy Ledwidge has well and truly thrown herself in at the deep end with music. This time last year she’d just picked up the flute to see if she could have a go. By the time we get to the Pick your Own Concert she setting herself up for her Grade 2 in both theory and flute playing, she’s joined a trio and signed up for an Open University Music degree! To give herself even more of a challenge she played Misty and Film Music, two stunning pieces for flute and piano.

Aaron Austen rounded the concert off with The Medallion Calls from Pirates of the Caribbean. The music started confidently and soon the well-known bass line was pumping and the melody began to shine through. Unfortunately for Aaron something slipped and broke his concentration causing a crashing halt to the music. Not to be put off he apologised to the audience and vowed to practice harder and try again at the Winter Wonderland. It’s unlucky when it happens, but that’s why we strive to keep the concert series as stress-free and friendly as we possibly can.

To finish off lead tutor Jo Carr took the opportunity to play her tenor saxophone. Something she’d never done before at one of her own concerts. Previously she’d always played the alto. She used the deeper sound to play a sonorous jazz version of When You Wish Upon a Star, which she dedicated to her late grandfather.

All that was left to do was thank our helpers: Aaron Austen and Team Ledwidge for their help in setting up, Scott Shortland for organising the sound and lighting, Russell Nash for compering, Ian Burnham for the photography, Maxine for running the raffle and doing the refreshments, Pat Hall for donating the toys for the raffle and a last minute thanks to Team Robinson who took it upon themselves to help Maxine with the piles of washing up.

All together we couldn’t have been more proud of the efforts made by all for this concert. Our next concert in the series is the much anticipated Winter Wonderland 2015; it’s going to be a big one!

This year we have asked our students which piece they would most like to perform at our summer concert and left it to them to decide what they would most like to do.  The result is looking to be a complete mix of styles and genres, the like of which we have not seen before – and that’s saying something for a Storm Dynamics concert!

The details of the event are below and don’t forget to keep an eye on our Facebook Event page to see all the latest news. 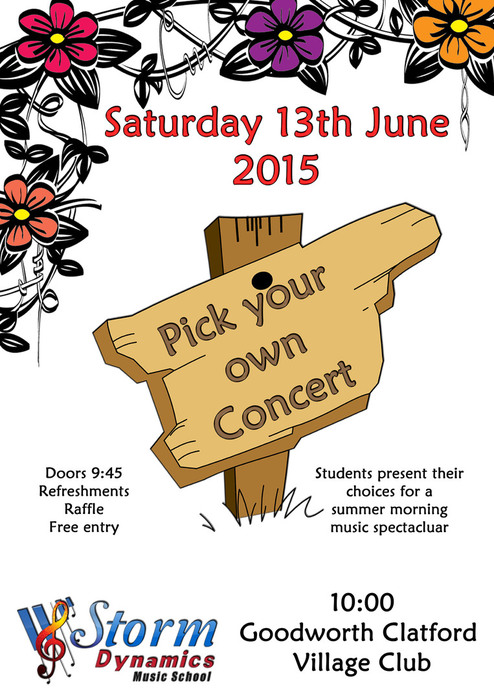