A Morning To Remember

On a Sunday morning in December the peace at the Hayward Suite of the Wolversdene Club was broken by the cacophony of dozens of instruments tuning up. Storm Dynamics Music School was holding its biggest concert to date: The Winter Wonderland 2013.

For many students this was their first opportunity to play in front of a crowd, and the crowd was much larger than excepted! Nerves were plentiful amongst the students but fortunately compere Russell Nash was there with a quiet, reassuring word before the show began.

Lead tutor Jo Carr kicked things off with a Jazz version of Deck the Halls and then it was over to the students who offered up a full and varied programme of everything from examination pieces to personal favourites to many, many Christmas carols.

We began with new student Scarlett Stokes who, although she had only been playing a few weeks, chose two play two traditional pieces; Oh When the Saints and Old MacDonald. She was followed by Storm Dynamics’ youngest student Grace Watts who played Good Morning, Good Night then Snowflakes and finally Circus Song, a short piece that she had written in her lessons.

Our youngest flautist went next. Phoebe Matten played Annie’s Song by John Denver, Johnny Todd, better known as the theme from Z Cars and Away in a Manager. Francesca Martindale is an up and coming young pianist and she played Twinkle Twinkle Little Star and Here we go Round the Mulberry Bush, both from memory. Hannah Ledwidge is one of the few clarinet players we currently have and she played Oh Little Town of Bethlehem and Whilst Shepherds Watched. This meant conquering the demanding break in the clarinet and the weeks she spend on the task paid off massively for her today.

Next Scarlett and Francesca took the opportunity to play a duet of London Bridge, initially this was all the girl were going to do for the concert but they both decided to be brave and play solos as well. Well done girls! Pianist Lucy Hide went next and she played Kings of Orient and We Wish You a Merry Christmas. So determined was she to play two piece in the concert that she learnt We Wish You a Merry Christmas in one week, which just shows what you can do if you put your mind to it.

Next up was Megan Robinson who was extremely nervous as this was her first ever concert. After a few calming words from compere Russell she was ready to go and delivered a note perfect performance of Auld Lang Syne from memory on her flute. A brilliant achievement.

Ian Burnham was the first of our adults to play and also the first of the saxophonists. Despite suffering from a bout of flu he did a marvellous rendition of the Pam Wedgewood jazz arrangement of Silent Night. Multi-instrumentalist Paul West took to the piano after that and played pieces Andante by Haydn and Gavotte from the ABRSM Grade Three book. We then returned to the flute as Robyn Grace made her public debut playing God Rest Ye Merry Gentlemen, Hark the Herald and Good King Wenceslas, the last of which was a flute duet with Jo Carr. The first of our electronic keyboard players went next.

Laura Wilson played You’re the Hero, a piece from her Grade One study book. She will be sitting the grade in the spring session of 2014. Paul West then came back to the stage to play The Christmas Song (better known as Chestnuts Roasting on an Open Fire) which is supposedly the most performed Christmas song in existence. Emily Grace then took to the stage with her saxophone for a rendition of Jingle Bells which had everyone humming along. We then had Noni Davis, an electronic keyboard player who has, so far, played a different keyboard in every concert. She has learnt Happy Xmas (War is Over) and conquered her nerves to give a wonderful rendition of the pop hit.

Adult pianist Aaron Austen went next. He took the opportunity to play his Grade 2 ABRSM pieces in public to help him prepare for the upcoming examination. He began with Tre’s Vite (which he announced was French for ‘I’m really very nervous’) then played Xiong Mao and finally Strange Things Happen. Our penultimate player was Rebecca Ledwidge who took the Christmas theme to heart and played In Dulci Jubilo, Winter Wonderland and I Believe in Father Christmas on her flute. Our final performance was by saxophonist Malcolm Amor who was also at his first ever concert. He played Mary’s Boy Child and Yesterday.

When the final note had died away a hush fell over the room as students and their supporters alike waited for the announcement of the winners of the first annual Storm Dynamics Awards Ceremony. The first prize given was for the winner of the Winter Quiz, a fiendishly difficult music themed quiz open to all students. The quiz was won by saxophonist Emily Grace who earned herself a £25 voucher for Amazon.co.uk. There were four trophies on offer: the Rising Star Award for best beginner, won by pianist Lucy Hide. The Most Improved Player Award, won by keyboard player Laura Wilson, the Lightning Award for the student with the best examination result over the year, won by pianist Aaron Austen and the Student of the Year award for the student who won the Student of the Week award the most times over the year, won by flautist Rebecca Ledwidge.

Before a buffet of tea, coffee and cake there was time for everyone to join in singing The Twelve Days of Christmas with a surprise for everyone when two confetti cannons fired to mark the end of an exceptional year of music making.

Praise for the Winter Wonderland Concert

“Giving my children the chance to participate in a concert was fantastic. It gave them something really important to aim for and gave them a really good reason to practise and improve. They were fascinated by the other musicians and the instruments they played; it also introduced them to different styles of music/playing. My girls are just so excited about the prospect of performing in another concert – the fact that it’s happening at Christmas makes it even more special. Partaking in events such as these really help them to develop their musical talents and gives them extra confidence when playing in front of others.”
Sandy Ledwidge

“It’s brilliant to know I’m not alone as an adult trying to learn an instrument.”
Ian Burnham – Saxophonist

“What a wonderful event, I really enjoyed it and Megan was so proud of herself once she’d done it.”
Mandy Robinson 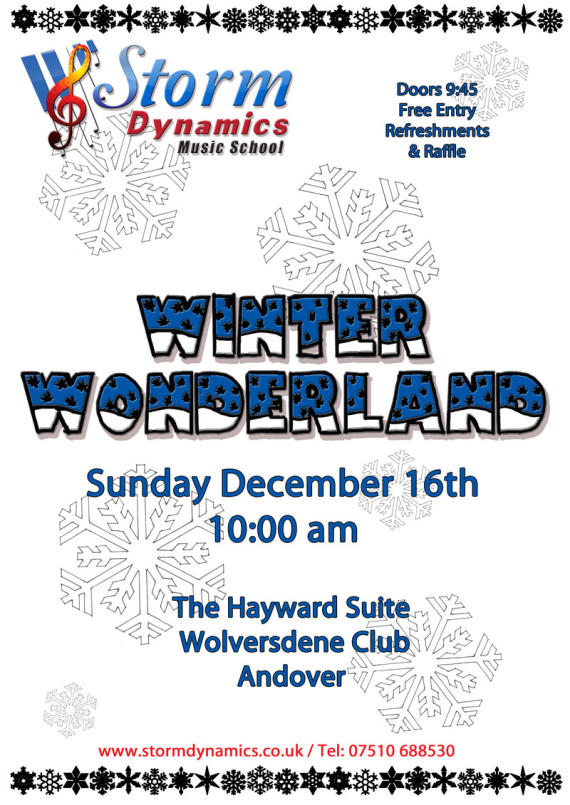